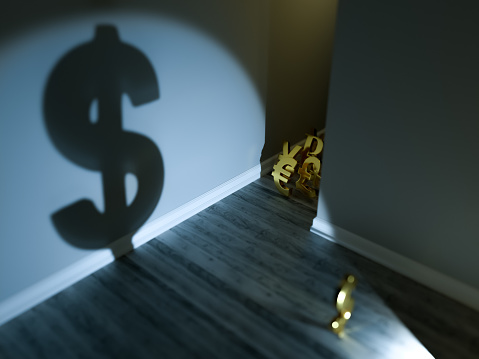 Even though treasury yields are retreating mildly today, stocks are staying in red in Europe and Asia. US futures point to a recovery but it’s unsure if the rebound could sustain before close. Investors are digesting comments from central bank officials regarding surging real long term rates and inflation. In particular, an ECB official noted that policy stimulus might need to step up if yields could remove effective support prematurely. BoE chief economist also warned that out of control inflation is currently the greater risk.

In the currency markets, Australian and New Zealand Dollar are currently the worst for the day, together with Sterling, on liquidation of risk-on trades. Dollar is the strongest one, followed by Yen and Swiss Franc. Technically, EUR/USD’s break of 1.2108 minor support is a sign of weakness, but it remains relatively resilient elsewhere. Gold is still defending 1760.46 support after breaching it earlier today.

Also released, goods trade deficit widened to USD -83.7B in January, versus expectation of USD -83.0B.

ECB Schnabel: May need to step up policy support in response to rising real long-term rates

ECB Executive Board Member Isabel Schnabel said a a speech that “changes in nominal rates have to be monitored closely and interpreted in the light of their driving forces”. “A rise in nominal yields that reflects an increase in inflation expectations is a welcome sign”. Even gradual increase in real yields may not be a concern ” if they reflect improving growth prospects”.

However, “a rise in real long-term rates at the early stages of the recovery, even if reflecting improved growth prospects, may withdraw vital policy support too early and too abruptly given the still fragile state of the economy”.

In the latter case, Schnabel warned, “policy will then have to step up its level of support.”

ECB chief economist Philip Lane told Spanish newspaper Expansión in an interview, “at this stage, an excessive tightening in yields would be inconsistent with fighting the pandemic shock to the inflation path. That’s what we said, and that’s what we will be continuing to keep an eye on day by day.

However, “at the same time, it is crystal clear that we are not engaged in yield curve control, in the sense that we want to keep a particular yield constant,” he added. “With the purchase programme we are trying to move the curve in a certain direction and with enough force to support inflation dynamics”.

BoE Haldane: Greater present risk of allowing inflationary tiger out of the bag

BoE chief economist Andy Haldane said in a speech that “inflation is the tiger whose tail central banks control”. The tiger has been “stirred” by “extraordinary events and policy actions of the past 12 months” due to the Covid crisis.

“If risks from the virus or elsewhere prove more persistent than expected, disinflationary forces could return”, he said.

“But, for me, there is a tangible risk inflation proves more difficult to tame, requiring monetary policymakers to act more assertively than is currently priced into financial markets,” he added. “People are right to caution about the risks of central banks acting too conservatively by tightening policy prematurely. But, for me, the greater risk at present is of central bank complacency allowing the inflationary (big) cat out of the bag.”.

Swiss KOF Economic Barometer rose to 102.7 in February, up from 96.5, above expectation of 97.0. It’s now slightly above long-term average of 100. The downward trend since September has “come to an end, at least for the time being”. For the next few months, the barometer now “signals somewhat more lively economic activity”.

Also released, GDP growth slowed to 0.3% qoq in Q3, sharply lower than Q4’s 7.6% qoq. “Major losses were recorded in the services directly affected by the tightening of the containment measures. Other industries continued to recover. On the whole, the second wave of the coronavirus until the end of 2020 had much less of an impact on the economy than the first wave did last spring.”

BoJ Kuroda: No intention of pushing 10-year yield up above 0% target

BoJ Governor Haruhiko Kuroda told the parliament today that “it’s important now to keep the entire yield curve stably low as the economy suffers the damage from COVID-19”. Also, “the BOJ has no intention of pushing up (10-year bond yields) above its target of around 0%.”

BoJ will also include the study on whey inflation has not sufficiently picked up in the upcoming March review. “The BOJ will examine the effects and side-effects of our asset purchases in hope of making them more effective and sustainable,” Kuroda reiterated. “We’re already buying ETFs flexibly because doing so is possible even under current guidelines.” 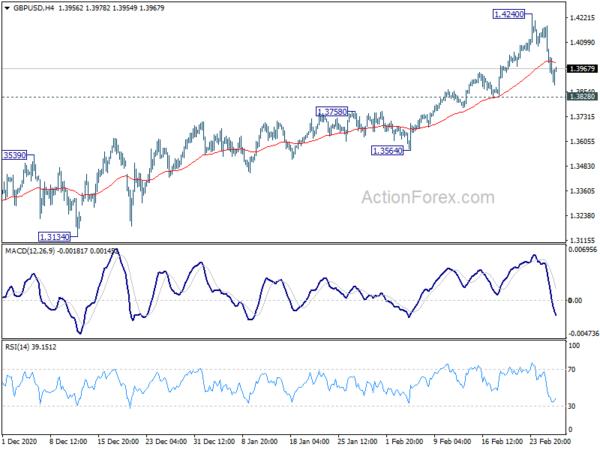 In the bigger picture, rise from 1.1409 medium term bottom is in progress. Further rally would be seen to 1.4376 resistance and above. Decisive break there will carry larger bullish implications and target 38.2% retracement of 2.1161 (2007 high) to 1.1409 (2020 low) at 1.5134. On the downside, break of 1.3482 resistance turned support is needed to be first indication of completion of the rise. Otherwise, outlook will stay cautiously bullish even in case of deep pullback. 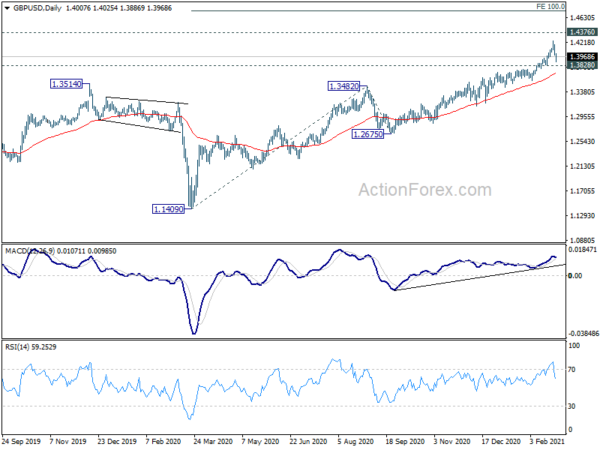